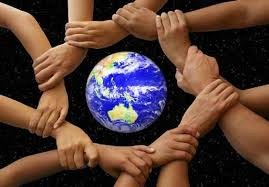 According to the US Conference of Catholic Bishops (USCCB), the church teaches that “We are one human family whatever our national, racial, ethnic, economic, and ideological differences. We are our brothers’ and sisters’ keepers, wherever they may be.”  Solidarity calls us to love our neighbors locally and across the world in concrete ways by acknowledging inequalities that exist and seeking justice for all. Although the Gospel calls us to be peacemakers, Pope Paul VI best explained what that means, when he said “if you want peace, work for justice,” The USCCB further explains, “Our love for all our sisters and brothers demands that we promote peace in a world surrounded by violence and conflict.”

Every Catholic is called to work for solidarity. St. John Paul II said, “Solidarity is not a feeling of vague compassion or shallow distress at the misfortunes of so many people, both near and far. On the contrary, it is a firm and persevering determination to commit oneself to the common good; that is to say, to the good of all and of each individual, because we are all really responsible for all.”

Catholic social teaching concerning solidarity applies to a broad range of current events, including global income inequality, the European refugee crisis, as well as the recent rally of hundreds of white nationalists, neo-Nazis and Ku Klux Klan members in Charlottesville, Virginia that promoted hate and ended in violence and death.

In keeping with our role as disciples of Christ, we are called to love everyone, to stand in support of all marginalized and vulnerable people, and to do what we can to seek peace and justice for all members of our human family, regardless of their race, nationality or religious identity.

Some saints, who have worked tirelessly for solidarity include:

One local organization, who works for justice and solidarity is:

In Matthew 5:9, Jesus said “Blessed are the peacemakers, they will be called children of God. We encourage you to express your Catholic faith by finding ways to express solidarity with the poor and marginalized in our society. God bless you as you work to promote Catholic Social teaching in your daily life.